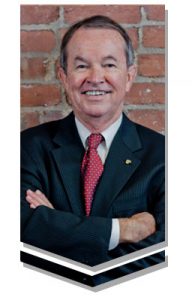 Born in the Cradle of Naval Aviation, Pensacola, Florida, Jerry Ware graduated from Ball High School in Galveston, earned a BBA in Finance from North Texas State University, and entered the Marine Corps as a Second Lieutenant. After military service, he honed his skills in finance as an internal auditor for Redman Industries in Dallas.  Jerry then earned his Juris Doctor degree from Baylor Law School.  He began his legal career in Dallas as an associate of Wilson, Berry, Jorgenson, and Fuqua, representing individuals who had suffered disabling personal injuries.  He then served as the Assistant City Attorney of Denton, Texas.  Jerry then returned to the  private sector as head of the negligence section of Windle Turley, P.C. in Dallas.  He has practiced for several years in Dallas as the sole principal in the Law Office of Jerry Ware, representing individuals and business entities in transactional and litigation matters in Dallas, the State of Texas, the United States, and internationally.

As Of Counsel Attorney to Lovins Trosclair, Jerry brings a breadth of knowledge, experience, and know-how to the Firm in the areas of probate, estate planning, real estate, insurance, domestic and international business transactions, personal injury, wrongful death, and litigation.